Wart fulfills his destiny by pulling the sword from the stone!

Each time you use Arthur’s power in a single round, his power gets progressively more helpful. It might take a few tries, but he’ll pull that sword out of the stone eventually.

Merlin described him as “The scrawny little fellow about 12. He’s a regular little grasshopper.”

Arthur was introduced to the game on July 4, 2019, as part of the Madam Mim Villain Event. 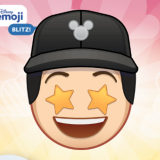