Takes a crash course on flying and clears emojis in the flight path!

What’s a flight with Launchpad without a crash landing! He clear emojis as he flies across the board. At first it’s just a plunging dive, but as you level him up, he does a loop-de-loop!

Launchpad McQuack had the distinction of being the only character to regularly appear on two different Disney Afternoon series: Ducktales and Darkwing Duck. 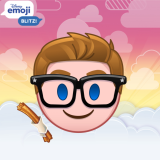